Ethics of the Ancestors

Pirkei Avot is among the most well known of all writings in Rabbinic Judaism. Pirkei Avot is so-named, according to the great commentator Rashi (11th century France), because it contains the “sayings” of the first “fathers” of Judaism. Originally known simply as Avot (literally, “fathers” or “ancestors”), it is one of the sixty-three tractates found in the Mishnah, the code of Jewish law compiled in the early third century C.E.

Unlike the other tractates in the Mishnah, Pirkei Avot is made up of story like material and maxims known as aggadah. It contains no halachah, binding legal material. Yet, it is supremely important because it justifies the authority of the rabbis, something the Bible could not do. It traces (in the first two chapters) the transmission of Jewish tradition from the revelation at Sinai through the leading rabbis of the generation that led the community following the destruction of the Second Temple (70C.E.). This unbroken chain of tradition provides a foundation for the Mishnah itself.

The statements attributed to the rabbis in Pirkei Avot express the basic concerns and central ideas that occupied the rabbis. Study becomes a religious act; the Torah becomes a text to be constantly studied; the reflections of past Torah study become an important link from one generation to the next; and Torah and its commentary become the literature that mirrors and shapes all Jewish experience.

Throughout Jewish history, different communities adopted different practices for the reading and studying of Pirkei Avot. Some communities studied Pirkei Avot during the entire winter and summer; some studied it from Passover to Sukkot. Still others limited its study to the period when the Book of Exodus was read and only then from the Sabbath when Parashat Yitro (containing the Ten Commandments) was read to the Sabbath when the last portion of Exodus was read.

Some of the more famous sayings from Pirkei Avot include:

1:6 Joshua ben Perachyah said, “Get yourself a teacher, find someone to study with, and judge everyone favorably.”

5:22 Ben Bag Bag used to say, “Turn it (Torah), and turn it, for everything is in it. Reflect on it and grow old and gray with it. Don’t turn from it, for nothing is better than it. 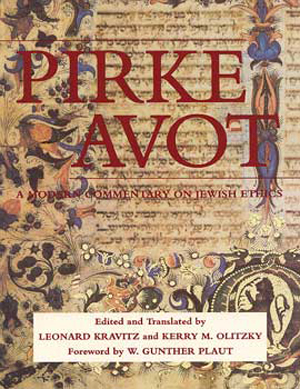