Civil rights are the non-political rights of citizenry. In the United States, those rights are guaranteed by, among other means, the 13th and 14th amendments to the Constitution. More broadly, however, civil rights refer to all those rights that allow a citizen to fully participate in civic society. The struggle for civil rights is the struggle to achieve equality of opportunity for all, regardless of race, religion, national origin, gender, sexual orientation, gender identity or disability.

In the 20th century, men and women fought for equal access to voting booths and worked to eliminate discrimination in the housing market, the workplace and in government services. More than 45 years after the signing of the landmark Civil Rights Act of 1964 and Voting Rights Act of 1965, the United States has done much to combat legal discrimination, but the legacy of racial inequality has yet to be erased. The 21st century has grown to include a more diverse America and a greater variety of issues, and even as we work to extend civil rights protections, we must still vigilantly guard those rights earned in earlier decades of struggle.

The Jewish people are intimately acquainted with the effects of bigotry. Our ancestors knew both the continuing indignities of second-class citizenship and the constant fear of xenophobic violence. Our history teaches us that discrimination against any members of a community threatens the security of the entire community. Thus, American Reform Jews have historically supported a variety of civil rights issues, including equality for the LGBT community, hate crimes legislation, the death penalty, criminal justice reforms, disability rights, and legislative protections from religious discrimination in the workplace.

Judaism teaches respect for the fundamental rights of others as each person's duty to God: "What is hateful to you, do not do to your neighbor" (Babylonian Talmud, Shabbat 31a). In the Jewish tradition, equality is based on the concept that all of God's children are "created in the image of God" (Genesis 1:27). From that flows the biblical injunction, "You shall have one law for the stranger and the citizen alike: for I Adonai am your God" (Leviticus 24:22)

Twentieth-century American Jews were committed to furthering civil rights and equality in other ways, too. From 1910 to 1940, more than 2,000 primary and secondary schools and 20 black colleges (including Howard, Dillard, and Fisk universities) were established in whole or in part by contributions from Jewish philanthropist Julius Rosenwald. At the height of the so-called "Rosenwald schools," nearly 40% of southern black Americans were educated at one of these institutions.

During the civil rights movement, Jewish activists represented a disproportionate number of whites involved in the struggle. Jews made up half of the young people who participated in the Mississippi Freedom Summer in 1964. Reform Jewish leaders were arrested with Rev. Dr. Martin Luther King, Jr. in St. Augustine, Florida, in 1964 after a challenge to racial segregation in public accommodations. Most famously, Rabbi Abraham Joshua Heschel marched arm-in-arm with Dr. King in his 1965 March on Selma. Today, Rabbi David Saperstein, director of the Religious Action Center of Reform Judaism, is the only non-African-American member of the NAACP board. The Civil Rights Act of 1964 and the Voting Rights Act of 1965 were drafted in the conference room of the Religious Action Center of Reform Judaism, under the aegis of the Leadership Conference, which for decades was located in the same building.

Today, the Jewish community continues its support of civil rights laws addressing persistent discrimination in voting, housing and employment against not only women and people of color but also against those who are gay, lesbian, bisexual, and transgender, and people with disabilities. 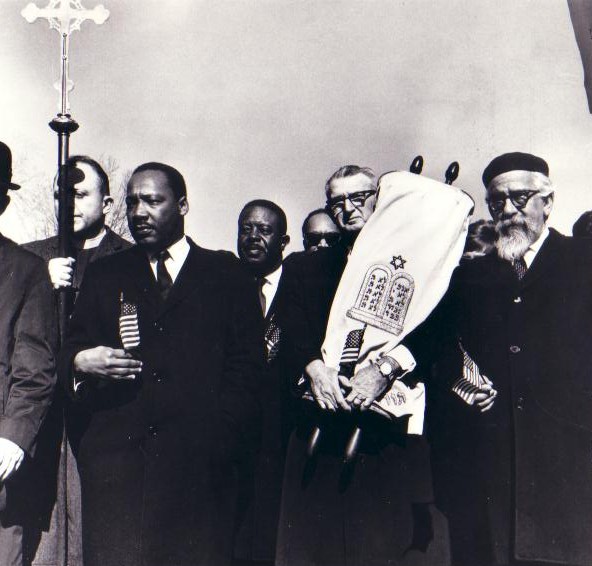